The Mothman was immortalized in the American consciousness with John Keel’s classic book The Mothman Prophecies, and the tale was re-energized by a 2003 Richard Gere film by the same name.  Centered in the Ohio River town of Point Pleasant, West Virginia, it’s one of my all-time favorite weird tales (I gave a quick-and-dirty overview of the Mothman furor here).

Now we have a new documentary on the Mothman phenomenon, including all the attendant high-strangeness hijinks, courtesy of  Small Town Monsters.  After the fashion of STM’s three other films, Mothman of Point Pleasant (their first non-bigfoot-related film) presents the story unembellished, straight from the mouths of Mothman witnesses and longtime Point Pleasant residents. There are no cheesy “re-enactments” in Small Town Monsters’ films.  Mothman creatively makes use of animation to illustrate some of the eyewitness accounts, but if you want to see flailing actors feigning horror as a CGI creature closes in, you will have to look elsewhere.  Mothman of Point Pleasant is creepy, educational, tragic, and deeply human.  The film manages to gracefully walk the less-traveled road between monster tale and tragedy, taking the viewer on an unexpected emotional roller-coaster along the way.

The Mothman story is far from straightforward.  Sure, there’s the weird, red-eyed, winged cryptid terrorizing small-town American teens, but perhaps what impressed me most about this film is how all of the story’s disparate elements were represented.  From all the weird “Men in Black” encounters, a Native American curse, possible extraterrestrial meddling, and the involvement of John Keel and local reporter Mary Hyre — it’s all here.

The filmmakers found Mothman witnesses willing to speak on camera about their decades-old experiences; the creepiest may have been the man who described awakening in the wee hours to see the Mothman in his bedroom.

Here is the peculiar strength of the Small Town Monsters films:  their treatment of the human element.  Seeing these people on camera, it becomes nearly impossible to dismiss such phenomena as “myths” or “urban legends.”  Real people are affected — often permanently and profoundly — by these events.  How would you feel if Mothman were standing at the foot of your bed at 3 a.m.?  Not too chipper, I reckon.

The Mothman story, of course, culminates in the tragedy of the Silver Bridge collapse.  The old bridge spanning the Ohio River collapsed without warning on December 15, 1967, sending dozens of cars plunging into the frigid current.  Forty-six lives were lost that day, and nobody in Point Pleasant was unaffected.  The bridge collapse is heartbreakingly chronicled in the film with interviews played over vintage footage from the disaster.

Was the collapse related to the Mothman?  Nobody knows, and this film avoids making the connection.  Nevertheless, after the disaster, Mothman sightings pretty much ended.

Of all Small Town Monsters’ films to date, this one succeeds the most at the “small town” angle.  It’s a biography of the town equally — if not even more — as it is of the monster.  The healing process after the weird events and devastation of fifty years ago has not been easy for Point Pleasant; for better or worse, the town will always remain in the Mothman’s shadow.  The townspeople have learned to live with and even embrace the Mothman’s legacy, with a Mothman Museum and a popular annual Mothman Festival.  But their story — like the film — is undeniably sad and haunting.

In the rolling, wooded hills alongside the Ohio River sits the quiet small town of Point Pleasant, West Virginia.  An ordinary-seeming place, Point Pleasant, perhaps, is not quite so innocent as its name would suggest.  Home to an abandoned explosives factory and a legendary Indian curse, the town was also ground zero for a rash of mysterious creature sightings in the 1960s — a creature who soon became known as Mothman.

In November 1966, two young couples went out for a drive near the old explosives plant.  This “TNT area” was abandoned after World War II and had become a hang-out spot for Point Pleasant kids.  As their car approached the area, the couples noticed a strange pair of lights shining in the brush.  It soon became apparent to the four that these lights were actually the glowing red eyes of a seven-foot-tall, winged, humanlike creature.  Terrified, they drove off as fast as possible, but the creature kept pace, allegedly up to speeds of 100 miles per hour. 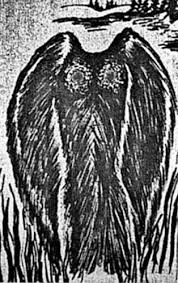 The four returned to Point Pleasant and summoned the police, who checked the area but found nothing unusual.  Deputies would later say they knew the four to be credible individuals, and their obvious fear convinced the officials that they’d seen something weird that night.

After the sighting was published in the local paper (a copy of the article is available HERE), others came forward to report sightings of similar strange creatures.  A group of gravediggers in a local cemetery had seen a manlike winged creature flying above them as they worked.  Another man reported his German shepherd had taken off after a large, unknown creature with glowing red eyes and was never seen again.  Dozens of sightings were reported over the next year. Paranormal researcher John Keel came to Point Pleasant to investigate and found a significant amount of UFO activity in the area.  Keel also reported a whole slew of creepy, mysterious “Men in Black” skulking about.  (Keel later based his book  The Mothman Prophecies on these incidents.)

Then tragedy struck.  The Silver Bridge, which spanned the Ohio River from Point Pleasant to Gallipolis, Ohio, collapsed suddenly in December 1967, sending dozens of cars into the ice-cold river.  Forty-six people lost their lives just days before Christmas.  No one in Point Pleasant was unaffected; everybody in the small town had friends or family who perished.  Thereafter, according to local tales, the Mothman disappeared.

Was the Mothman trying to warn of the disaster, or was he simply a harbinger of doom?  Was it an extraterrestrial from one of Keel’s UFOs?  Or is there a rational, natural explanation? A popular theory suggests that what people were seeing in the months leading up to the Silver Bridge catastrophe were simply herons, or owls, or slightly confused sandhill cranes. Perhaps it was a genetically modified ornithological oddity that had mutated from living in the polluted gloom of an abandoned explosives factory.  Or perhaps it was part of Chief Cornstalk’s curse.

Cornstalk, known as Hokoleska in his native language, was a Shawnee chief who lived in the area during the Revolutionary War.  Cornstalk, his son, and two other Shawnee were taken hostage and murdered by rogue militia members near present-day Point Pleasant in 1777.  As the last breaths escaped the chief’s body, he is said to have pronounced a curse upon that land and all those who dwell there.  Some have speculated the Mothman was a spirit being brought about by the curse. 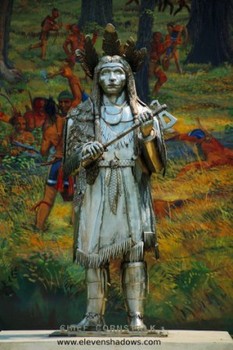 Whatever it is — or was — that people were seeing in the 1960s, it’s become a cottage industry in Point Pleasant.  The 2002 Richard Gere movie The Mothman Prophecies (based very loosely on Keel’s book) renewed interest in the creature, and Point Pleasant’s Mothman Museum and its annual Mothman festival draw thousands of curiosity seekers to the town on the banks of the Ohio.  Regardless of its origins, the Mothman has become one of America’s most enduring and beloved legends.

Goodreads. I review a lot of Bigfoot books and other stuff.

For your further enjoyment and edification