Occasionally I become nostalgic for the days of my childhood.  I was a child in the late 80s and early 90s.  The Simpsons were cutting-edge and Robert Stack was rocking the Unsolved Mysteries.  My family had a computer from Radio Shack with a dot-matrix printer the size of a coffee table.  I played Tetris on it while listening to MC Hammer on the boom box.  Sometimes my mom let friends sleep over. What did little girls do at slumber parties at my  house?  We didn’t do each others’ hair or talk about guys.  We watched SNL, pretended to be Hans and Franz, dabbled with the Ouija board, and read the Weekly World News.

Sometimes we may have also made crank calls.  Think about this next time you answer the phone:  Caller ID ruined childhood.

But back to Weekly World News.  I remember buying the familiar black-and-white tabloid in the checkout line at the Sparkle Market.  Yes, that’s a real place, in a land called Ohio.

In those pre-internet days, the Weekly World News was a child’s best friend.  It was our lifeline to the wild, the weird, the absurd, and the hyperbolic.  Where else could we find out what Elvis, alive and well, was up to these days?  What other publication kept us up-to-date on the activities of Bigfoot, JFK, the Loch Ness Monster, and Lorena Bobbitt?  No other major news outlet reported on the tragic heartbreak of spontaneous human combustion.  And certainly no one else bothered to inform us about the space aliens manipulating our government. 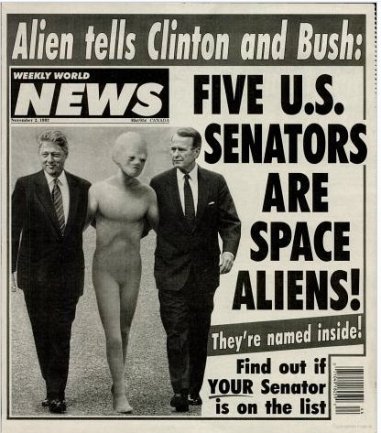 I remember staying up into the wee hours once after reading a story about a lost space-alien baby, confused and gibbering, wandering into someone’s suburban house in the middle of the night.  The prospect of that happening terrified me, for some reason.  It was awesome.  It was all the news we needed.

Of course we knew it wasn’t real, but it COULD have been, you know?  Just the same as reading The Wizard of Oz (another childhood favorite); what if a tornado CAN transport you to a parallel universe?  It’d be scary as heck, but also pretty nifty.  You know it’s not real, but you still want to believe it.  The speculation and mystery were fun, and they still are.  Here’s an important distinction:  Unlike that time when I found a drawer in my house full of my own baby teeth and the realization dawned that there was no Tooth Fairy, I lacked hard evidence that there were not, in actuality, Bat Children inhabiting the caves of North America. 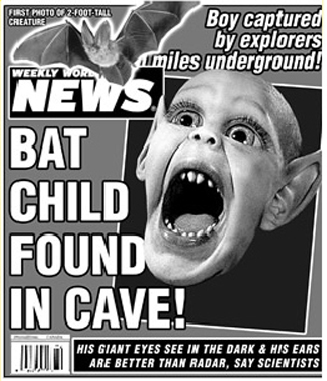 What is the significance here?  I don’t know.  Perhaps my generation is more open-minded because of this intentional media blurring of the lines between reality and its alternative.  Or perhaps we’re a bunch of cold, hard nihilists for the same reason.  Or, likely, a little of both.

Anyway, as I said earlier, I was feeling nostalgic for Weekly World News and started googling around, and to my utter astonishment, it’s still around!  Although waiting in the checkout line became exponentially more dull after WWN‘s print edition went defunct in 2007, it was later reconfigured for the wonderful Interweb.  No, it’s not the same, but it’s heartening that the WWN torch is still aflame.  Now I know that Bigfoot was recently spotted in a San Francisco gay bar, and that, when selling one’s soul to the devil, “You must know what you’re doing when you make the deal or Satan will cheat you blind.”

Good advice.  So visit the site, relive your childhood, and allow the spirit of Bat Boy to rise from the ashes of the past.  For my part, I’m pretty sure it’s still all the news I need.  I mean, if Donald Trump is running for President, my reality is seriously skewed anyway.

Goodreads. I review a lot of Bigfoot books and other stuff.

For your further enjoyment and edification